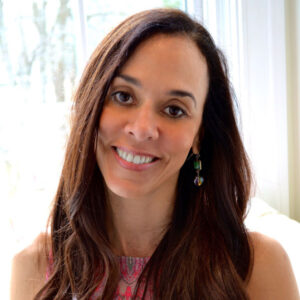 Juliet Thorburn is a Wilmington-based artist with deep Caribbean roots and equally strong talent nurtured by her studies in Jamaica, the United States, and Italy.  Masterful and versatile, Juliet imbues each piece with her signature “magical” touch.  Whether using watercolor or oils, and whether expressing realism or an abstract form she calls “Ethereals” and “Jewelled Ethereals”, this Jamaican fine artist repeatedly harnesses her energy and talent to produce unique views from her mind’s eye.

While generally shaped by three main influences—her multicultural heritage, her artist grandmother, the late Barbara Parsons, and the breathtaking beauty of her native Jamaica—Juliet’s greatest source of inspiration has always been nature’s energy.

While generally shaped by three main influences—her multicultural heritage, her artist grandmother, the late Barbara Parsons, and the breathtaking beauty of her native Jamaica—Juliet’s greatest source of inspiration has always been nature’s energy.  Growing up amid the island’s natural beauty, she quickly became one of its premier nature artists early in her career.

Spirited and soulful, Juliet’s watercolors and illustrations later paved the way for similar success in her works in oils, images that presented a decidedly fresh boldness.  It was during this period that the Jamaican fine artist turned her creative eye inward. Departing from the realism of her early works, she began to portray the essence of her subjects in equally intriguing abstract works she describes as “spiritual imagery.”

Juliet attributes her particular use of color, light, and ethereal detail to the specialized training she received in the United States and Italy during her earlier years.  Studying first as a graphic artist at the Art Institute of Fort Lauderdale, she then traveled to Florence to study painting and drawing at L’Istituto per L’Arte e Il Restauro.  Additional training some years later at a watercolor workshop in Taos, New Mexico further honed the Jamaican fine artist’s skills.

Following her first solo show in 1994, held at a popular Kingston gallery, Juliet enjoyed a series of successful solo shows, group exhibits both in Jamaica and abroad, and the honor of having her works included repeatedly in the prestigious Jamaica National Gallery Biennial Exhibition.  Since relocating to the USA in 2008, she has participated in a number of exhibitions in Southeast Pennsylvania, and Wilmington, Delaware.

The Jamaican fine artist’s most recent project saw her producing an enchanting watercolor series of the island’s historic churches.  Today that outstanding labor of love is chronicled in a beautiful Jamaican coffee table book, “A Watercolor Tribute to Historic Jamaican Churches.”  Published in 2015, the book includes research text and photographs, and is a delight to those with an appreciation for Caribbean art and history.

WATERCOLORS
Most of Juliet’s representational pieces mark her earlier days as a young artist, when she won enthusiastic acclaim for her seemingly magical use of color and light.

THE ETHEREALS
This series, and the “Jewelled Ethereals” (watercolors enhanced by the sparkle of glass), marked her growing appreciation for the abstract. Dancing with magic and whimsy, these pieces became an instant favorite with the artist’s followers.

THE SPIRITUAL SERIES
Her deep respect for spirituality has Juliet focusing on a series of oils featuring mystical sacred imagery, the center of which is the Madonna.